During the lunchtime and break pupils have been borrowing the cameras and clipboard to take part in "The Wales We Want" conversation. Lauren from Funky Dragon had come in to work with some year 6 pupils on the Monday morning, by the afternoon some reception pupils had a go. Miss Allen showed their work to the rest of the school at Assembly the next day and everyone wanted to have a go! 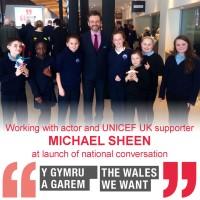 Earlier in the year some pupils had joined other schools at the launch event with the minister Jeff Cuthbert and UNICEF Ambassador Michael Sheen. It was great to see all the different parties that have supported the children's work there, The Children's Commissioner for Wales; UNICEF; Fairtrade Wales; Keep Wales Tidy; Funky Dragon.

A lot of the messages that the children have given focus on fairness, and the recent healthy living weeks have obviously had an effect on their answers with a few 'everyone eats healthily', 'grow their own food' and lots of variations on exercise. As with any work with children we cannot wait to see what they say next

Part of being a UNESCO Associated School is sustainability, Children's

Rights and a global perspective too. In 2012 we had asked the Welsh Government's Sustainability Minister to take our mascot out to Rio for the climate change talks. Ahead of that the secretary General of the United Nations had asked everyone to think about the "future that we want" for the world. The children came up with the idea of a macaw to make it a bit of fun

You can of course take part in a Global survey in the My World 2015, asking you to chooose 6 'values' that are important to you and your family.