On 22nd Feb, John and Tony from the South East Wales Rivers Trust returned to Millbank with the salmon eggs for us to care for.If we answered some of their questions about Salmon then we got to place some of the eggs into the tank.

We had all been eagerly awaiting the visit as we enjoyed their first one so much. We looked for the coolest place in the school, which ironically was in the Boiler House that heated the whole school. Tony told us that it is really important that the water temperature remained below 12°C if it started to get warm then we had to add the ice packs to cool it down. This was the responsibility of the whole class along with changing some of the water twice a week and removing any dead eggs.

Tony Rees the Chairman of the Rivers Trust had come along with Jon to deliver the eggs to us. They had been packed in a polystyrene box with river ice up at Brecon and been taken back to Merthyr then down to Cardiff and the last stop was Gladstone Primary in Barry.

Jon showed us a dead egg which had an opaque milky quality, we were quite lucky that we had only a few eggs at the end that did not hatch. These appear to have been washed out of the basket and were under the matting, maybe they got damaged. But most hatched.

Many of the photos were taken.

Hopefully the excitement and joy of learning is evident in the children's faces, all the children in the school let alone this class wanted to help take the water temperature and have a look for themselves at the eggs.

Some of the other classes even compared the salmon eggs with the eggs of the frog spawn. That was a nice scientific experiment but the important thing is that the children did it all in their own time.

The children took some amazing photos and by changing the light were able to observe the hearts beating inside the egg- wow! Using the digital microscope and camera to capture images are just part of ICT and just another skill for the children to develop.

We talked to the children about the egg sac telling them that it was a bit like a battery with all the energy to sustain the little Alevins for the first 10 days or so until they were able to eat for themselves. The little globules of the fish oil are all of course supplied by the mother to each egg from the reserves she built up in the Atlantic - remember she does not eat once she comes back into the River.

On the Monday the whole school was excited to learn that the little salmon had started to hatch. By plugging the microscope into the laptop we were able to project the images straight onto the white board.

One of the eggs hatched in front of the class and the little alevin wiggled out. The big egg sac meant that he had to really move a lot to make any headway. Whilst we will have a few weeks to be taught how to swim next term. The salmon know how to swim straight away without anyone there to teach them. It is all pretty amazing.

The children all had a go at taking some of the photos. If you take them in quick succession you can stitch them together to make a little animated 'GIFF' that makes it look like it is moving.

You can see a lot with a magnifying glass but the microscope -cheap as it is- really does open up a whole new world for the children to explore. The Alevin is only about 2cm long, its only about 2mm wide apart from its egg sac which is about 8-10mm.

Again you can see the blood vessels and because it's a moving photo you can see that it is 'breathing the water' in and out as the gills open. You can again make out the heart pumping and the speckled pattern on his skin to help camoflauge him.

We think we can see a lens forming on the dark saucer shaped eyes, what do you think?

Here you can see the heart beating and the blood vessels around the gills absorbing oxygen from the water.

On Thursday John and his friends came back into the school to take the little Alevins back up to the Environment Agency Wales nursery in Brecon to be cared for until they are big enough to be released into the rivers.

It has been an amazing privilege to be part of this project, we have all learnt lots about salmon, life cycles and our local environment. Equally important is to meet people like the members of the SEWRT and the Environment Agency that give up their time and work hard to make a difference to our local natural environments. Projects like the 'Salmon Homecoming' are just one small part of their work. We hope that it will inspire the children to grow up and follow their example.

We made a little card to say "thank you" for their work as they left us they went on to collect the fish from all the other schools that take part. There is a little video here. We are all looking foreward to seeing our little salmon again in July and hope to be able to release them into the River. If we keep helping the salmon in this way, we hope that they should soon be back to the same numbers before man started polluting and daming rivers.

We use our weekly newsletters -and this website- to keep parents informed about these projects so that they can be more involved in their children's education. It's also a nice way to showcase the children's lovely photos.

Of course it's also about giving children the opportunity to learn new skills and present them with opportunities that will inspire them to take a greater interest in school and education. Article 29 of the UNCRC is all about the education children in the world ahve a right to

(a) The development of the child's personality, talents and mental and physical abilities to their fullest potential;

(d) The preparation of the child for responsible life in a free society..

(e) The development of respect for the natural environment.

Some people think that learning about the environment and sustainability is really important. When Jane Davidson AM visited us two years ago to answer the questions from the children she was very keen to get children learning about such things. In the 2009 WAG document 'One Wales: One Planet, a new Sustainable Development Scheme for Wales' It said that it was at the heart of government and a sustainable Wales would have "Sustainable development and global citizenship ... firmly embedded into all levels of educational provision and lifelong learning in Wales, and all schools are Eco and Fair Trade schools. Levels of educational attainment are high."

In the summer term we not only get to release the bigger salmon fry into our river but we also are looking forward to having the duck eggs back again to hatch. 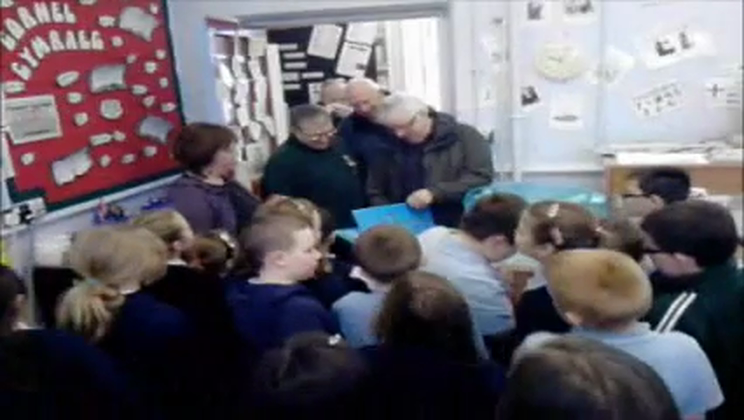