1.) What were you like at school? Were you ever sent to the head teacher for being naughty?

Yes I was sent to the headteacher, i thought it would be a good idea to walk up a hill with my friends, but it was during school time and the head teacher was not happy.

2.) What is the best and worst part of being Minister for Environment?

I love meeting new people and seeing all the good things that are happening all around us. The worst aspect is trying to persuade others to look after the environment.

3.) What is your proudest achievement? What would you most like to achieve?

4.) If you could have one magic wish for the world what would it be?

5.) What goals have you set yourself as an individual and as a Minister?

My own personal goal is to be greener every year, as a minister I want Wales to be a little greener each year.

6.) Who is the nicest person you have met?

The nicest people are often those that care about the environment.

7.) Would you like to be First Minister one day?

No, after Rhodri Morgan stood down a few people suggested that I stand for the post but I want to concentrate on my big interests which are the Environment and Education.

8.) Mr Peter Davies the Sustainable Development Commissioner came in to speak to some of us recently, do you ever argue about the best way forward for Wales?

No I do not argue with the Commissioner. I think Peter and I are both very interested in seeing Wales take taking a lead in environmentalism & sustainability 9.)In our survey we found 84% of people though the green dot logo meant that the product could be recycled. Do you think that we should make producers responsible for their packaging in the UK like other parts of Europe?

I think we do need to work with the rest of the UK to encourage improvements in packaging and labeling using less and recycling more.

Yes companies should be honest about the environmental impact of their products & packaging. TetraPak say that they can be easily recycled but practically it is very difficult. Governments need to help. [In post that very day was a reply letter from Princes to Green Gang about their Orange Juice tetrapak found during the litterpick saying that 'the cartons are fully recyclable and 85% of the UK population have access to carton recycling facilities.']

11.) Do you grow your own food? Do you like gardening what is your favourite fruit?

12.) It is National walk to school week, how can we encourage more people to leave their cars at home?

I have just come from Marlborough Rd Primary where they had over 100 pupils on a walking bus, normally they only have ten or so but I would encourage you to give it another go at Millbank too and get a parent to start a walking bus to school.

13.) 95% of the litter we collected was able to be recycled but not all litter carried recycling codes on them. Do you think all companies should be forced to put recycling information on their packaging?

I think that all companies should be encouraged to display the recycling code on their products. There are government funded projects like WRAP Waste Resources Action Programme to help companies.

14.) Many forms of litter we collected has a small anti-litter logo on in. (often a fraction of a percent) Should the logos be more prominent or is the type of person who litters unlikely to care about such a notice?

There are so many messages that people want to put on the packets, health and dietary information, carbon emissions, anti littering, recycling.  I think everyone needs educating on this so they can understand what to look for, but I think there should be a strong recycling & anti-litter message on all packaging

15.) Most of the litter we collect is drinks cans and bottles, would you support the notion of a drinks deposit scheme to reduce litter and promote recycling? We want to try and send a “Message in a bottle” to Ministers, AM,s and MP’s what should we say in it to get noticed?

I used to collect empty pop bottles for the deposit when I was a young girl. As a Minister we did fund an experiment with a bottle deposit scheme in Abergavenny, but people returned bottles from outside the area or bottles  that were already being recycled and used up all the funding. So it needs to be a nationwide recycling scheme. But perhaps you could look at setting up a reward scheme at the school.

16.) Do you think that UN Climate change conference in Copenhagen was a missed opportunity or a start? Were you at the conference?

Yes I was at the conference and to some extent it was a missed opportunity but it is far too important an issue just to leave it at that: so we must look at it as a start to getting the reduction in Carbon emissions that the planet needs and all countries work together.

17.) Do you like football what team do you support?

I prefer Rugby I am not really that keen on football, my son really enjoys supporting Cardiff City FC and so we support them as a family. I hope that they do well in their game to get into the Premiere league.

18.) Water mills and windmills are thought of as picturesque, why are modern wind turbines seen as ugly?

I do not think that they are ugly, I think that we need to use the environment to harness energy and we should be looking to use more water, wind and solar energy as well as from food waste.

19.) What advice or suggestions do you want to give us or young people in general

I would like to see that all schools have an Eco-committee or Green Gang and get their Green Flag to demonstrate that they really are environmentally aware and sustainable. But all groups in the community should get involved in litter picks, energy conservation. I also think it is important that we all walk or cycle more and only use a car when we really need to.

I am off next to the National Museum of Wales to launch a new scheme whereby all people in wales can make a pledge to do one thing to help biodiversity, it could be planting wild seeds, feeding the birds or making a pond, in fact it can be as big or small a commitment as you want but why not encourage others to visit and make that pledge as individuals and as a group. Visit the Pledge4nature website

We all thanked Mrs Davidson for taking the time during her busy day to see us. We hope that we can follow her example and make such a positive difference to Wales and our planet. 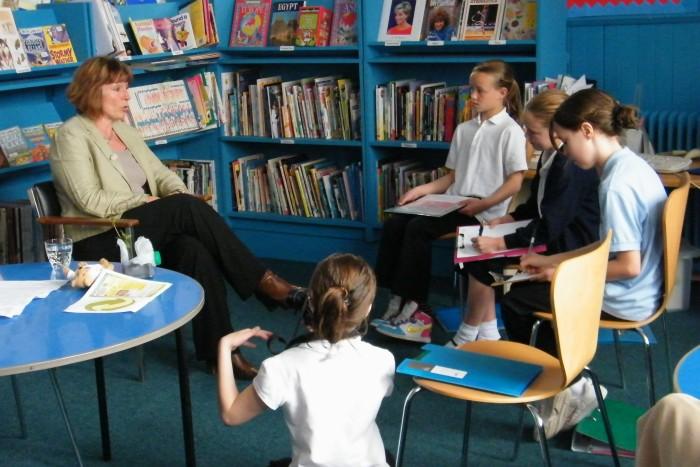 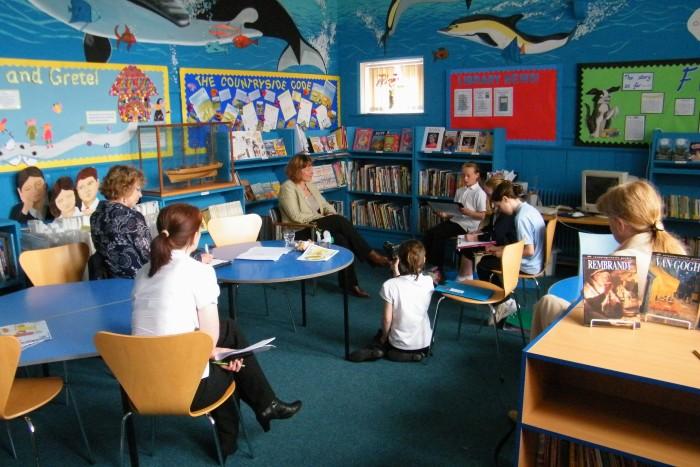 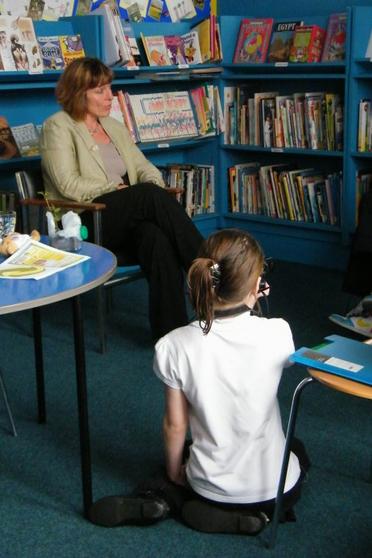 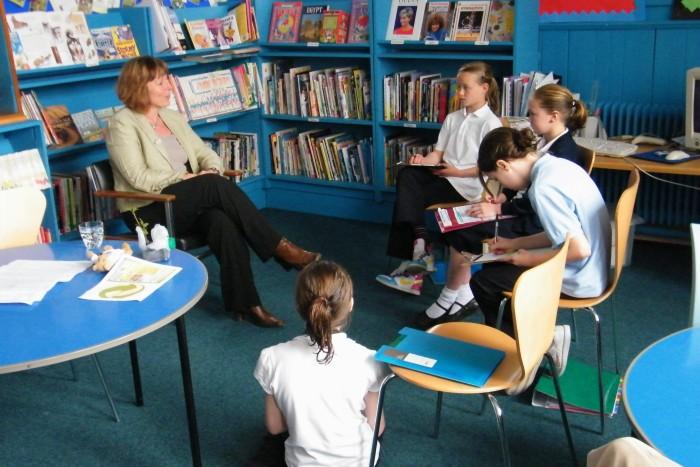 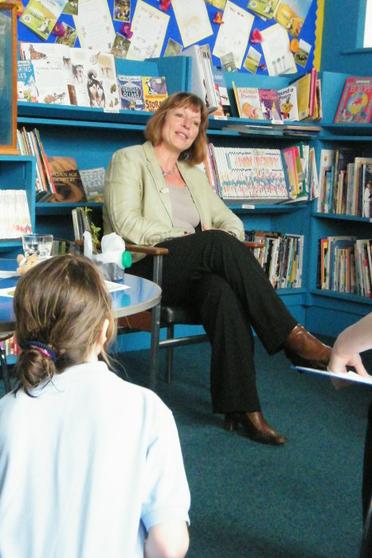 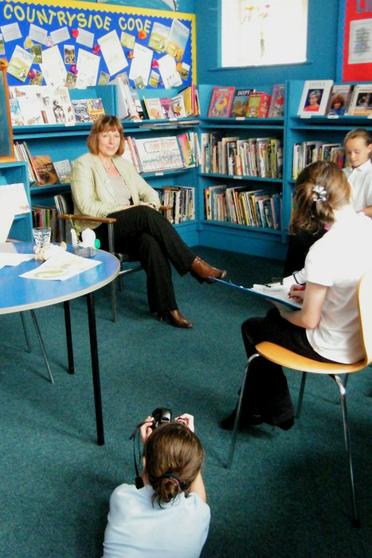 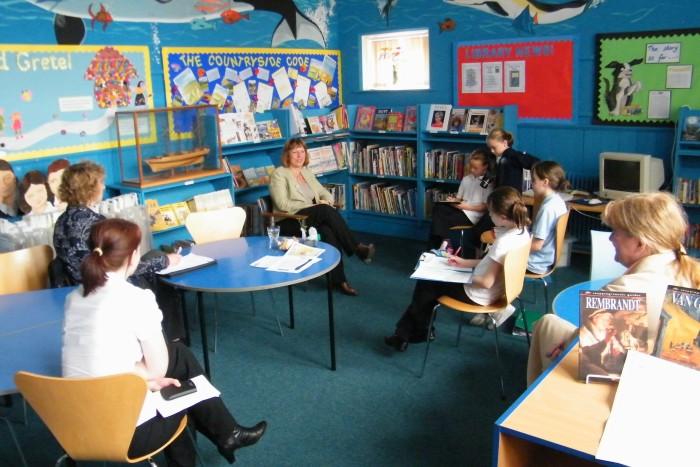 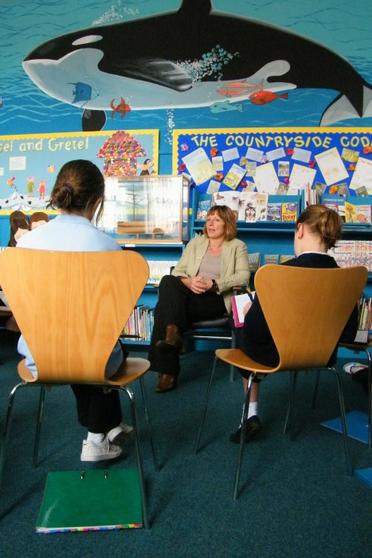 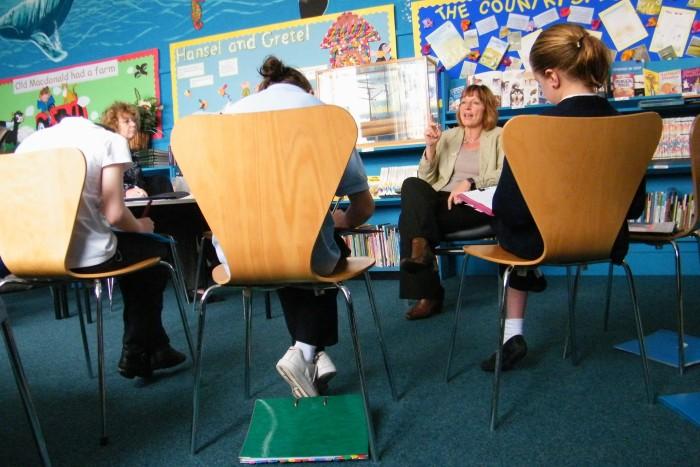 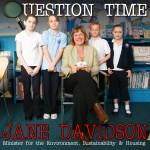 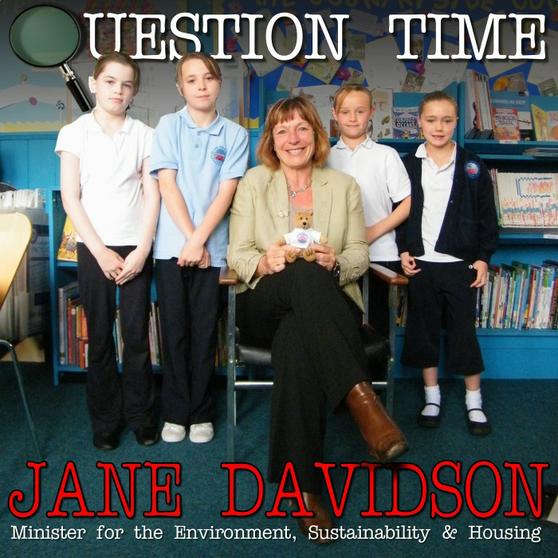 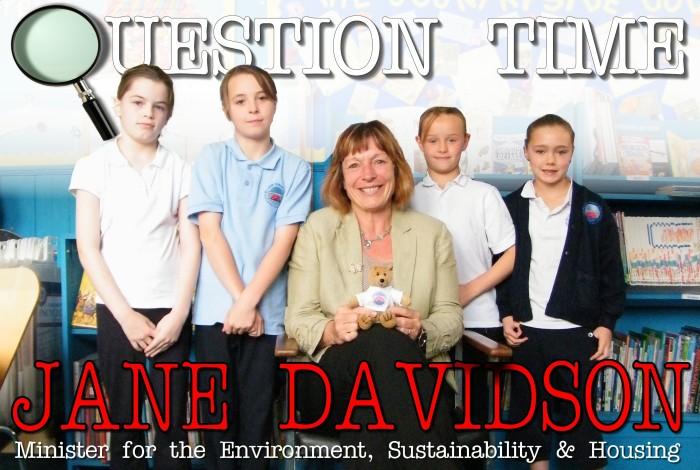 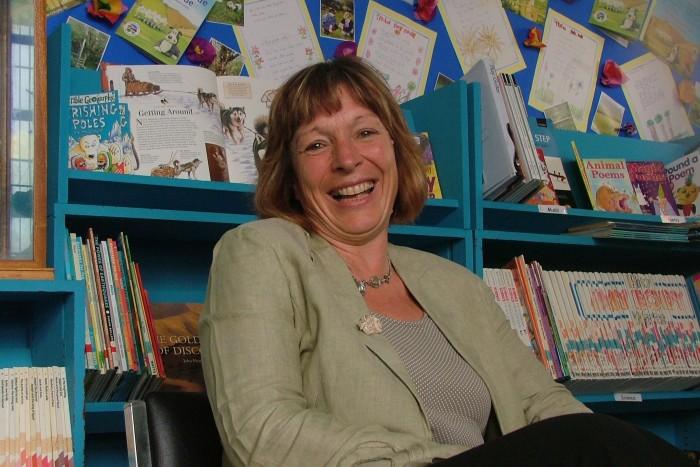 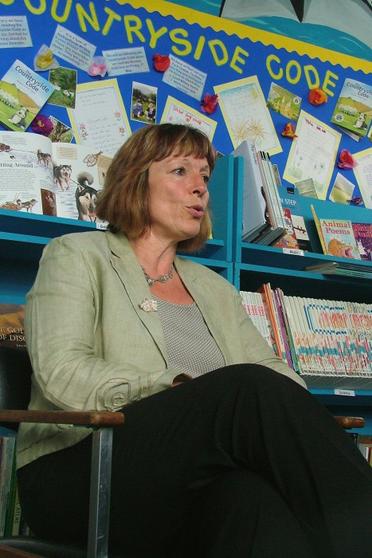 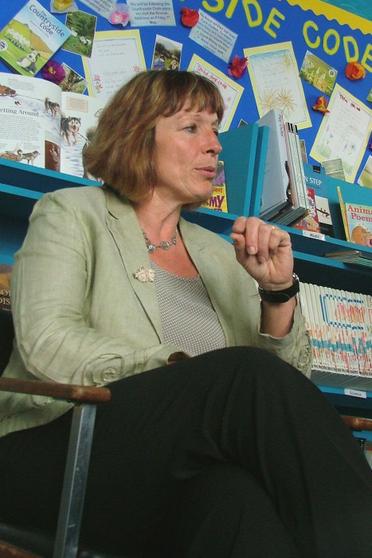 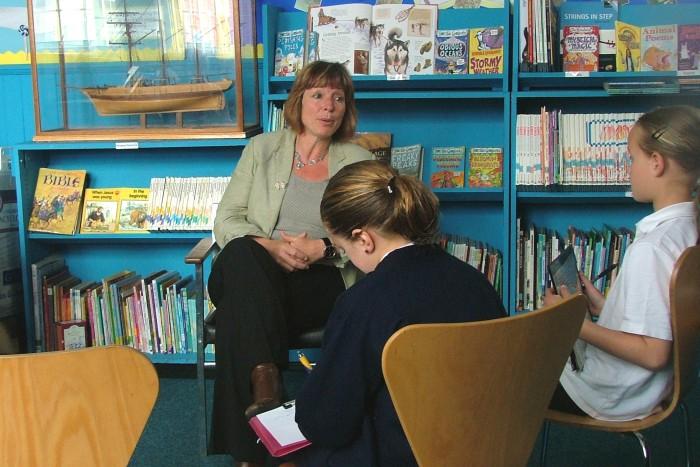 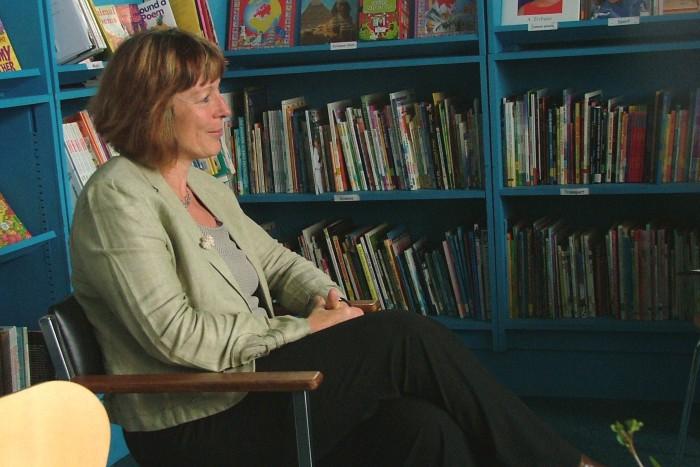 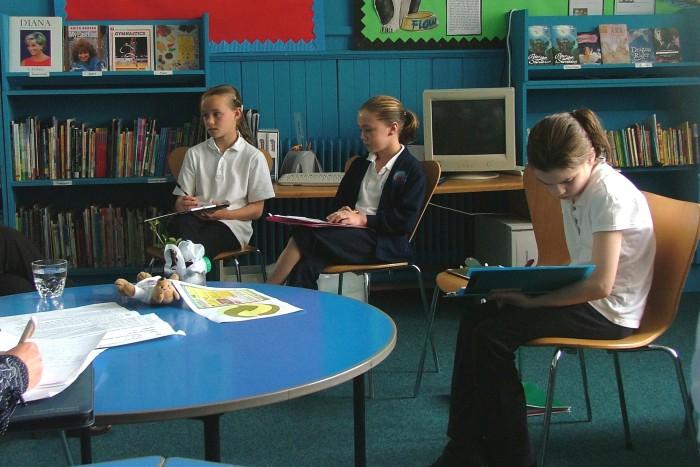 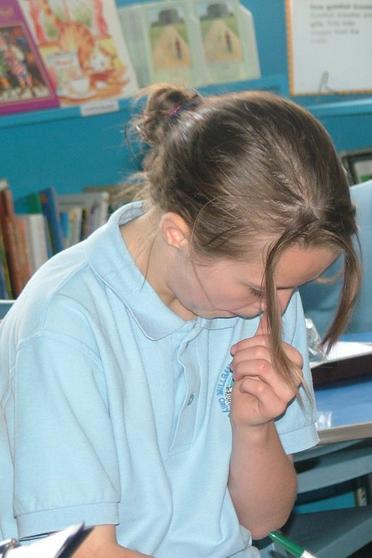 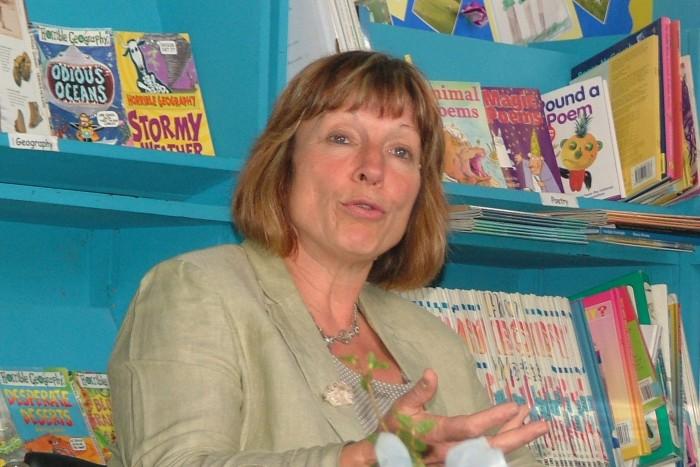 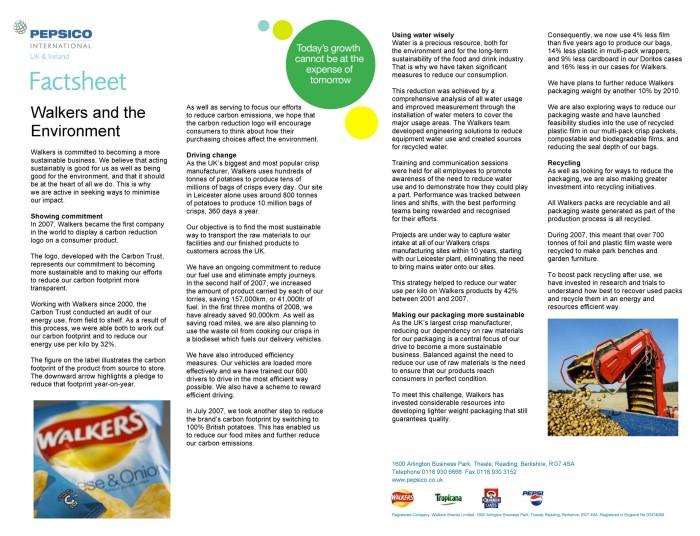 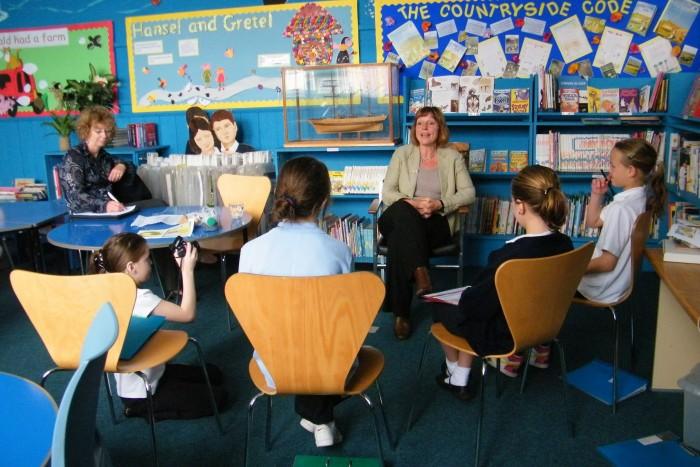 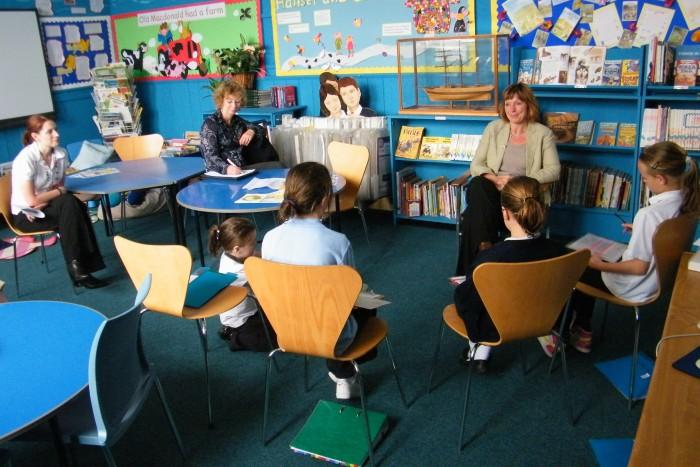